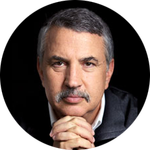 From its very inception, Donald Trumpâ€™s campaign for president has been life imitating Twitter. His candidacy is built on Twitter bursts and insults that touch hot buttons, momentarily salve anxieties and put a fist through the face of political correctness, but without any credible programs for implementation.

Where Trump has been a true innovator is in his willingness to rhetorically combine positions from the isolationist right, the far right, the center right and the center left. If I were running for president, Iâ€™d approach politics in the same way: not as a liberal, a conservative, a libertarian or a centrist.

Iâ€™d run as an extremist.

The agenda that could actually make America great again would combine the best ideas of the extreme left and the extreme right. This year is probably too soon for such a radical platform, but by 2020 â€” after more extreme weather, after machines replace more middle-class jobs, after more mass shootings and after much more global disorder â€” voters will realize that our stale left-right parties canâ€™t produce the needed answers for our postindustrial era. Accelerations in Mooreâ€™s law, the market and climate change are transforming the workplace, the environment and nation-states, leaving people feeling insecure and unmoored.

Itâ€™s time for a true nonpartisan extremist, one whose platform combines the following:

â–  Expansion of the earned-income tax credit to top-up wages for low-income workers and introduction of a negative income tax to ensure a government-guaranteed income floor for every American. In an age when machines are gobbling low-skilled jobs, weâ€™ll need both.

â–  Common Core education standards as the law of the land, to raise education benchmarks across the country, so high school graduates meet the higher skill levels that good jobs will increasingly demand. But those higher standards should be phased in with funding to enable every teacher to have the professional development time to learn the new curriculum those standards require and to buy the materials needed to teach it.

â–  Controlling low-skilled immigration while removing all limits on H-1B visas for foreign high-skilled knowledge workers and doubling the research funding for our national labs and institutes of health to drive basic research. Nothing would spin off more new good jobs and industries than that combination.

â–  New accelerated tax incentives and elimination of all regulatory barriers to rapidly scale up deployment of superfast bandwidth for both wire line and wireless networks to ensure that next-generation Internet services are developed in America. And borrowing $100 billion at todayâ€™s super-low government interest rates to upgrade our ports, airports and grids and to create jobs.

â–  Bans on the manufacture and sale of all semiautomatic and other military-style guns and government offers to buy back any rifle or pistol in circulation. It wonâ€™t solve the problem, but Australia proved that such programs can help reduce gun deaths.

To pay for all this, a phased-in innovation and tax agenda that incentivizes start-ups and hiring. That means: Slash all corporate taxes, income taxes, personal deductions and corporate subsidies and replace them with a carbon tax, a value-added consumption tax (except on groceries and other necessities), a tax on bullets and a tax on all sugary drinks â€” with offsets for the lowest-income earners.

We need a tax system that shrinks what we donâ€™t want â€” carbon, sugar and bullets â€” and incentivizes what we need. If we slash corporate taxes, many more companies will want to locate here, and the ones domiciled here will have the incentive to bring home foreign profits and plow them into research and new business lines.

â–  An independent commission appointed to review Dodd-Frank and Sarbanes-Oxley to determine which, if any, of their provisions are needlessly making it harder for entrepreneurs to raise capital or start businesses. We need to be sure weâ€™re preventing recklessness â€” not risk-taking.

â–  Copy Britain: Strictly limit national political campaign spending and the length of the campaign to a period of a few months. It makes it much harder for billionaires to buy candidates.

â–  Increased military spending and ensuring that our intelligence services have all the legally monitored latitude they need to confront todayâ€™s cyberenabled terrorists â€” because if thereâ€™s one more 9/11, many voters will be ready to throw out all civil liberties. And with the world cleaving into zones of â€œorderâ€ and â€œdisorder,â€ weâ€™ll need to project more power to protect the former and stabilize the latter.

In sum, our slow growth, inequality and national security challenges require radical solutions: strengthening safety nets, curbing the bad environmental and health behaviors that are bankrupting us and paying for it all by sharply incentivizing risk-taking, innovation, investment and hiring.

That calls for a nonpartisan extremist for president whoâ€™s ready to go far left and far right â€” simultaneously. Thatâ€™s my 2020 vision, and in four years the country just might be ready for it.